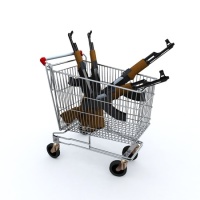 Chicago mayor Rahm Emanuel has put together a new plan that calls for sweeping gun control changes in an effort to reduce the growing number of gun deaths across the city.

The move may better help prevent guns from falling into the wrong hands, but it wasn’t an idea solely championed by Emanuel. In fact, Illinois had until July to come up with new gun sales laws, which were ruled unconstitutional by a federal judge back in January.

The proposal, which Emanuel coined as “essential,” offers a three-pronged solution:

While the proposal should help cut down on on the spread of illegal guns within the state, a large portion of illegal firearms enter Illinois from neighboring states with lax gun laws. States likes Indiana, Mississippi and Wisconsin all have rather weak gun control laws, making it easy for someone to drive across state lines to purchase a weapon.

Research shows that nearly 60 percent of the guns used to commit a crime in Chicago between 2009 and 2013 were purchased outside of Illinois. The Chicago PD and the University of Chicago Crime Lab said illegal guns are a big reason why the city has such a high homicide rate.

“This report shows the extent to which illegal guns are the leading factor in driving violence, the sources of those guns, and simple, reasonable steps we can take to curb the flow of illegal guns onto our streets,” Emanuel said in a press release.

There have been 774 shootings in Chicago so far this year, which is nearly identical to the rate of shootings in 2013.