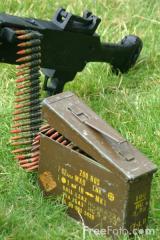 Cook County Board President Toni Preckwinkle has proposed a tax on bullets in the hopes that it will curb the city’s rising gun violence.

The proposal would implement a tax of 5 cents for each bullet purchased and a tax of $25 on each firearm sold in Cook County – which includes Chicago. If imposed, the tax would garner nearly $1 million per year. This money would be used for medical care for gunshot victims and other services.

But the big question is will this bullet tax actually decrease gun violence?

I certainly appreciate what Ms. Preckwinkle is trying to do with this proposed tax.  The violence and homicide rate in Cook County is getting out of control.  The government is seeking any way possible to curb the violence (gun violence in particular).  But you have to question the point of this tax, when deciding whether to implement it or not.

Would a tax of 5 cents have any effect on stopping gun violence?  Probably not.  Most shootings are not carefully planned out, but rather heat of the moment decisions. The average shooter will not even consider the tax when aiming and shooting his gun.

However, the taxes raised could go a long way to helping out the victims of gun violence.  Treatment, rehab, and medical costs could be defrayed by the implementation of this tax.  Classes that teach children about stopping violence could be implemented with this money.  So, while I do not believe this tax will stop any potential future violence, I do believe that it could be a valuable tool to help the victims of gun violence.

What do you think?